Papa CJ (@papacj) is a world-renowned stand-up comedian and has won awards for both Asia’s and India’s Best Stand-up Comedian. He has performed over 2000 shows in 25 countries and has had numerous appearances on NBC, BBC, Comedy Central, Showtime, MTV, Paramount, The Comedy Channel, ITV and a host of other international networks. He is the only Indian comedian to have shot his own solo special with Comedy Central Asia. Forbes Magazine called him ‘the global face of Indian stand-up’ and Harvard Business Review called him one of the most influential comedians around the world. He has taped a Showtime USA stand-up comedy special with Russell Peters and on the American TV show Last Comic Standing, he was placed in the top 10 from over 3000 contestants across the world.

"Accomplished stand-up that crosses continents and decades." - The Scotsman, Scotland

"You will walk out vowing to tell your friends about this comedian." - Herald Sun, Australia

Papa CJ has represented India at the Shared History Festival in South Africa and had standing ovations on Broadway in New York. He was the first Indian comedian to be invited to premiere at the prestigious Soho Theatre in London, the Melbourne International Comedy Festival, the Just for Laughs Festival in London, and the Sydney and Perth Comedy festivals in Australia.

Papa CJ was instrumental in starting off the English language stand-up comedy industry in India after he returned to the country in 2008. Under his initiative called The Papa CJ Happiness Project he performs in support of charitable causes across the world. 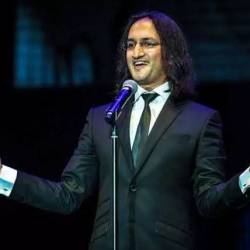